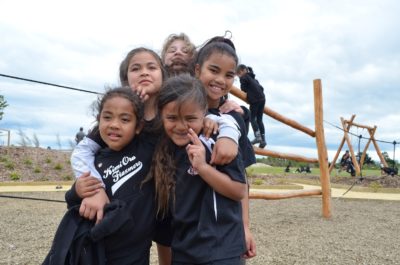 Eastern & Central Community Trust (ECCT) is delighted to see the completion of Kimi Ora School’s innovative new community playground in Hawke’s Bay – a project that received one of the Trust’s largest grants to date.

The playground was implemented with the help of Te Puna Taiao Chartiable Trust, which aims to transform the outdoor spaces of schools into places that are both outdoor play and learning environments for children during school time, as well as culturally-connected playgrounds and gardens for the wider community outside of school hours.

The school caters for approximately 160 students from year one to year eight, with 50% of students being of Maori descent and 48% of Pasifika descent. The playground’s design reflects the people and history of the land, and connects with the school’s neighbours at Te Aranga Marae and soon to be developed Waingākau Village.

“The space has been designed to improve the hauora of tamariki, whānau and the whole community by providing a place for whānau to come together to have fun and get moving together in a beautiful natural setting that connects to Te Ao Māori,” Kimi Ora Community School Principal, Matt O’Dowda, says.

Since its official opening in September the space has already been well-utilised, with people of all ages enjoying the unique features from dawn till dusk, including a sledding hill and skate bowl, slides and swings, Pasifika courtyard, community eating area, replica pā area, water play and bush area and boardwalk.

“It is wonderful to see the project completed and already so well-utilised by both students and the community,” Shelly says.

“I congratulate the school and all involved in the establishment of this beautiful space for their forward-thinking, hard work and aroha that has obviously been poured into the project.”

The school’s tamariki, whānau, teachers and Board of Trustees extended their thanks to ECCT and other funders for funding the playground, which is seen as an important part of revitalising Flaxmere West and lifting education outcomes in the community.

“The project has provided a great opportunity for a new start for our Flaxmere West community,” Matt says.

While the community playground is completed, the entire school rebuild is anticipated to be completed by the end of the year.