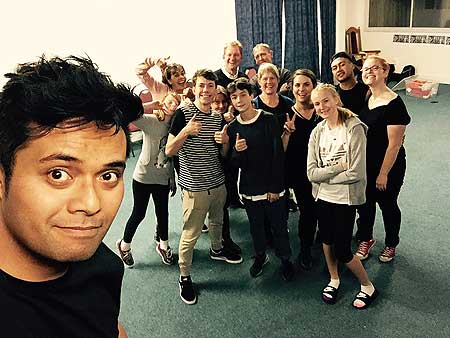 How do you bring all the facets of professional theatre to life for young people? The team at Young & Hungry Arts Trust have found a way to bring theatre to the regions with their tour of schools – firing up imaginations and challenging thinking along the way.

Living in the regions can make access to professional New Zealand theatre a bit of a challenge, but the Young & Hungry Arts Trust (YHAT) have made it their mission to give young people aged 15-25 the opportunity to appreciate, create and participate in great theatre by going on tour. In 2017, they approached Eastern & Central Community Trust for funding to support their Hawke’s Bay and Wairarapa legs and make the tour more affordable for schools.

The Trust employs a diverse range of young New Zealand actors who are recent graduates from performing arts schools across the country. Many are not much older than the audience they’re performing for, and they’re able to provide insight into their hard-learned lessons on the precarious acting industry.

“Acting is not an easy career to make your way in, and it’s not as glamorous as many young people think,” says Partnerships and Programmes Manager Diana Cable. “But going on a 10-week tour is valuable experience for these up-and-coming young actors, and by sharing their knowledge, they’re helping fire the imaginations of the next generation of theatre lovers.”

In 2017, the team toured Outliers, a programme that featured key extracts from modern New Zealand plays that focused on the perspective of the outlier. It also featured two playwrights from the NZQA prescribed reading list, and offered schools the opportunity to add a workshop or question and answer session. They also provided fantastic study resources to help students with external exam requirements, and feedback from participants showed that it was a valuable opportunity for students to gain a fresh insight on performances and script interpretation.

“We know that the larger cities have easier access to professional theatre companies, so being able to go into schools in the regions and show them how to tell a good story, using a team of professional actors with just a stage, no costumes and few props, can be a revelation to students. They’re so used to seeing high-tech movies,” says Diana. “It’s important for young people to understand that good storytelling can be done well with focused and committed actors.”

Over the past 24 years, the team have connected with over 1250 students, and commissioned 73 plays, fostering New Zealand acting and playwriting talent and providing a pool of plays for hire, aimed at that age group. YHAT are already working on their plans for 2018, with a nationwide tour focusing on the work of Māori playwrights, directed by Nancy Brunning.

See what else the Young & Hungry Arts Trust team get up to on their website.